Towards achieving the Total Man Concept programme of Landmark University which is geared towards developing Man in his triune nature, the Sport Sub-Unit of the Directorate; working in collaboration with the Sports arm of the Student Representative Council places their emphasis on the development of Man’s physical being.

To achieve this, sporting activities, competitions, and physical fitness exercises are regularly organized for the students at the University’s Sports complex as well as other Sporting arenas around the Halls of Residence.

Some of such activities include Athletics, Football, Volleyball, Lawn Tennis and Basket Ball. The Common Rooms located within the Halls of Residence are also equipped with Table Tennis boards for indoor games.

Most prominent of the competitions is the Chancellor’s Cup Football Competition that holds annually during the Omega Semester.

With these activities in place, Directorate has been able fulfill her objective of keeping the students physically fit. 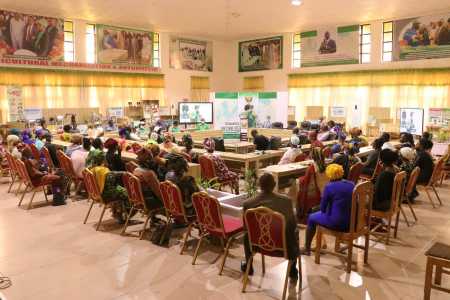 Landmark University’s quest to restore the dignity of the black race was again demonstrated in her collaboration with the Global Hope for Women and Children Foundation (GLOHWOC) to provide technical capacity building on agribusiness for women in Irepodun Local Government Area (LGA) of Kwara State on Tuesday, 28th July 2020. The capacity-building event which focused on plant, animal and livestock production and their value chains had 62 participants from the various villages across the LGA.

In his welcome address, the Vice-Chancellor, Professor Adeniyi Olayanju, reiterated the commitment of the University to her tripodal responsibilities, noting how the University is positioned to impact society positively with her knowledge and facility endowments. Commending the initiative to empower women in society, Professor Olayanju situated the connections between women’s empowerment, food security, and agricultural growth. He emphasised the crucial role of women in agricultural development, adding that inequalities in access to agricultural resources has limited their opportunities and development, thereby contributing to global hunger and poverty. He submitted that eradication of the inequalities in agriculture must be prioritized to give women their place in agriculture. “It is, therefore, important, given women's crucial role in food production and provision, that any effort towards sustainable food security must address their limited access to productive resources including knowledge of maximizing agricultural value chains.” While expressing concern over the effect of COVID-19 on agricultural activities in the year 2020, he noted the aptness of the workshop, saying that it would spur the participants to immediate agricultural engagements in preparation for 2021 and beyond. He, therefore, expressed optimism that the technical training would expose them to the opportunities in agribusiness that would increase their participation in agriculture tending towards attaining the Sustainable Development Goals (SDGs) of the United Nation – Zero Hunger, No Poverty, and Eradicate Inequalities.

Speaking on behalf of the Chief Executive Officer of the Foundation, Mrs Christy Abayomi-Oluwole, the Foundation’s Financial Executive, Mr Alaba Adesuyi, said the project was supported by Global Affairs Canada through ActionAid Nigeria to provide economic empowerment for women in two (2) local government areas of Kwara State which are Irepodun and Ilorin South. He added that the foundation would not only train the women but would also provide them with mentorship and other enabling resources which included land allocations and capital disbursement amongst others to maximize the knowledge acquired for their economic freedom. He appreciated the management of Landmark University for their open-door policy towards people development.

In her remarks, the Dean, School of Postgraduate Studies and former Dean, College of Agricultural Sciences, Professor Charity Aremu, could not hide her delight over the turnout of women interested in agriculture, asserting that it was a move to stall the impending global famine as forecast by the United Nations. She congratulated the women for making such a decision to exempt themselves from the impending hunger and noted that increased knowledge base is all that is required to have successful agricultural practice.

Speaking earlier, the Dean, College of Agricultural Sciences, Professor Olasunkanmi Bamiro had traced the challenges of rural women in agriculture to the non-realisation of agriculture as a business that could change their economic status, noting that many of them do not see agriculture beyond subsistence. He said until they realise agriculture is a business, their level of involvement would remain low.

The women proceeded to the Landmark University Teaching and Research Farm for the technical session which exposed them to enhanced methods in plant and animal farming and their respective value chains.