He gained Admission to Ikolaba Grammar School, Agodi G.R.A. Ibadan in 1980. As a pioneer student, he was the Food Prefect and later, the Labour Prefect of the School. 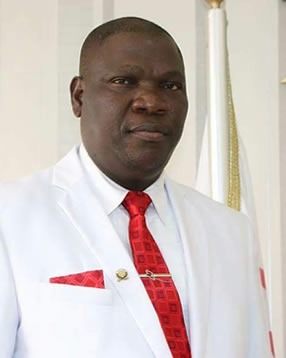 He passed out of the secondary school in 1985 with good grades in WASCE. He went to Jibril Martin Memorial Grammar School, Iponri, Lagos in 1986 for his Lower Basic School and was briefly at Yaba College of Technology, Lagos.

He then proceeded to the University of Ibadan, in 1987. As an undergraduate, he was on the Dean’s Honours’ list and was the Public Relations Officer and later the President of the Agricultural Engineering Students’ Association of the University.

He graduated from the University of Ibadan with B.Sc, M.Sc and Ph.D. in Agricultural Engineering in 1992, 1997 and 2002 respectively. As an undergraduate, he was on the Dean’s Honours list and the President of Agricultural Engineering Students’ Society. He also got the Nigerian Society of Engineers (NSE) Graduate of the Year Award in 1996 and in 1997 got the NSE Best Graduate Design Award.

He was with Satibor/Nova Technology, Ibadan as Technical Engineer between 1994 and 1996 and at the Federal Institute of Industrial Research, Oshodi (FIIRO) Lagos as Principal Research Engineer between 1997 and 2004. He was engaged in the Project Design and Development of Agricultural and Food Processing Equipment using Computer Aided Design and Drafting (CADD) package.

He joined the services of the Federal University of Agriculture, Abeokuta in June 2004 as a Lecturer 1, re-appointed Senior Lecturer in September, 2005 and Promoted Professor of Agricultural Mechanization in October 2012. He has, since, been involved in the execution of some national and international collaborative projects such as DFID/PrOpCom Rice Project, UNDP/SMEDAN Auto-Spare Parts Project, RMRDC/FIIRO Beniseed Project and IITA/FUNAAB Cassava Weed Project. Some of these have also won awards and financial gains for his University.

Professor Olayanju was the Deputy Dean, College of Engineering, between 2007 and 2009, the Pioneer Dean of Engineering, OYSCATECH, a member of Appointment and Promotion Committee of Academics Staff (APCAS) and the Dean of Student Affairs of FUNAAB until his appointment as the 3rd Substantive Vice – Chancellor of Landmark University.

He delivered the 51st Inaugural lecture of the University on the titled: Man, Material and Machine - The Tricycle of Agricultural Mechanization (the soft copy is online and the video coverage of the lecture is on you tube).

Professor Olayanju has attended some local and international conferences as well as short training courses on Vegetable Oil Extraction and Bamboo Utilization in India and China respectively.

Professor Adeniyi Olayanju is an ordained Deacon and a member of Living Faith Church, a.k.a. Winners Chapel, Obantoko, the Chairman, Shiloh 2012/2013 Committee and Pioneer Head of Protocol Unit of the Church.

He is married to Mrs. Tina Olayanju, a Business Administrator and the marriage is blessed with lovely children. 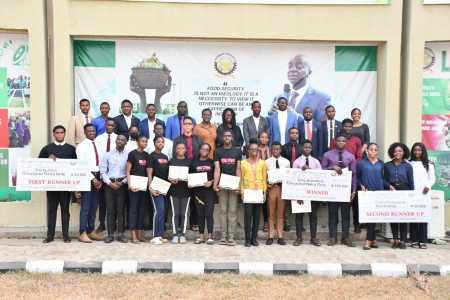 It was a defining moment for Landmark University on Saturday 22nd January 2022 as student groups across the University pitched their ideas to redefine the University Cafeteria and Shopping Mall operations towards upscaling their service delivery to the student populace. The Innovation Challenge tagged “Redefine Landmark University Cafeteria and Shopping Mall” was under the auspices of the Student Development Office of the Directorate of Student Affairs and was contested by 7 teams who demonstrated their ingenuity and commitment towards quality student welfare in the University. In line with the saying ‘charity begins at home’, the event further gave expression to the Chancellor, Dr David Oyedepo’s idea of a university as ‘a place where solutions to societal problems are found and value added to humanity’, noting the impact of the challenge on the University community at a time it is most needed.

While giving her remarks, the Acting Vice-Chancellor, Professor Charity Aremu expressed great delight in the event which she described as a turning point for the Landmark University business ventures noting its value-adding import as well as the great opportunity it afforded the participating students to create a niche for themselves with their innovations. She commended the students for distinguishing themselves with their innovations which categorized them among the few that engage in productive thinking to create solutions. “Only those who can maximise their brains and environment can rule their world,” she stimulated the students further while encouraging others to identify areas of contribution. The Vice-Chancellor appreciated the leadership of the Student Affairs for identifying such bringboard for the students to reach their goals.

In furtherance of the gratification derived from this event, the Registrar, Miss Fola Oyinloye emphasized that such programmes which engage students more positively have the capacity to reduce in no small measure disciplinary actions against the students, hence encouraging the Directorate of Student Affairs to explore the student development platform towards the fulfilment of the University’s mission drive. In addition, the Registrar noted that the students have exemplified the Landmark University student model who is expected to be a game-changer, world changer and solution provider.

The Dean of Student Affairs, Dr Razaq Animashaun, therefore, appreciated the management for the support towards the reality of the programme while assuring them of more impactful and remarkable programmes for the students.

According to the Head, Student Development Office, Mr Noah Olaibi, the challenge was born out of the University’s commitment to develop a culture of problem-solving, ingenuity, and high productivity amongst the students and to activate beneficial skills that will be required for progress in life.