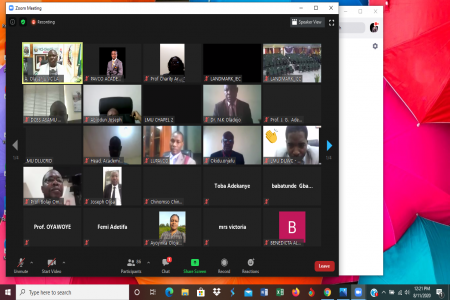 The management of Landmark, ably led by the Vice-Chancellor, Professor Adeniyi Olayanju, on Tuesday, 11th August 2020, called for a re-evaluation of the University’s research, publication and ranking model with a view to accelerating the pace towards the realization of her academic goals.

At the Maiden Webinar of Landmark University Centre for Research, Innovations and Discoveries (LUCRID) entitled "Research, Publication and Ranking: A Re-assessment of Landmark Model", the Vice-Chancellor, against the backdrop of the current reality, reiterated the importance of the reevaluation of the model set at the 2017/2018 executive advance for faculty and staff, noting that it would be apt for reawakening of the University community to its responsibilities. He, therefore, tasked all members of management to update their roadmap documents for re-presentation to the University at the newly established weekly seminar under the auspices of the LUCRID.

Presenting his paper, the Vice-Chancellor emphasized the importance of benchmarking the University with other universities locally and globally. He noted that Landmark is faring well in the comity of universities in Kwara State and Nigeria based on her performance in research publications in Scopus-indexed journals, adding that among top 500 Nigerian authors ranking recently a total of 18 were from Landmark University. He said that beyond the variables of concentration of talents, abundant resources and favourable governance which are considered for world universities ranking, the University needs to scale up her efforts at delivering Covenant plus (+) output as envisaged. He remarked that the University’s model was in line with Covenant’s ReCITE Agenda which prioritizes Teaching, Research, Citation, and Innovation in the 30, 30, 30 and 10 percentage order respectively.