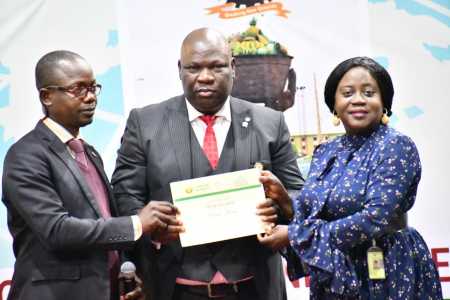 As Landmark University vigorously pursues its goal of securing a befitting position on the International Ranking landscape as the flagship of University Education in Nigeria, it became imperative for the University management led by the Vice-Chancellor, Professor Adeniyi Olayanju to reassess its 12 strategic goals (LSGs) as contained in the University’s Strategic Plan of 2017-2022 in line with the United Nations’ Sustainable Development Goals (SDGs) on Tuesday 27th July 2021.

Themed “Exploring the Synergy between Landmark Strategic Goals (LSGs 1/12) and the UN-Sustainable Development Goals (SDGs 1/17)”, the event featured in the Webinar Series of the Landmark University Centre for Research, Innovations and Discoveries (LUCRID) and was attended by members of the University management and the SDG research team leaders to situate the University’s goals in the SDGs.

In his presentation titled “Reassessment of Landmark Strategic Goals (2017 – 2022) towards a Sustainable Agrarian Revolution,” the Vice-Chancellor, Professor Olayanju stated that in addition to assessing the compliant level of his administration with the Goals as contained in the University Strategic Plan of 2017 – 2022, a Strategic Planning Committee would be inaugurated with the mandate to draft the University Strategic Plan for 2022 – 2027. According to him, the step was not only to draw a parallel between the achievements of the university and the LSGs while identifying the gaps to be filled up but also important towards charting a direction for the sustainable realization of the vision of the University. Drawing the synergy between the LSGs and the SDGs, the Vice-Chancellor also emphasized the global orientation of the university, saying it has adopted a hybrid approach of glocalisation towards the realization of its goals which is to start local while aiming global.

In furtherance of this direction, Professor Olayanju inaugurated a Strategic Planning Committee to be chaired by Professor Enoch Oyawoye (Former Dean, College of Agricultural Sciences and Former Deputy Vice-Chancellor in the University) to draft the University Strategic Plan for 2022 – 2027.

Also worthy of note was the recognition of both faculty and staff who led the SDGs research groups since inception and the presentation of certificates of Excellence Awards to outstanding researchers in the University whose names appeared on the SciVal ranking of Top 500 Nigerian Authors for 2019 and 2020 for the University to claim and sustain its 2nd highest concentration of authors position after Covenant University.

Speaking earlier, the Registrar, Miss Fola Oyinloye had stressed the importance of Strategic planning to any organisation and particularly the Landmark University context while welcoming the gathering. She noted that the University had been guided by its strategic plans since 2012 which signposted its intentionality rather than being accidental in its approach to accomplishments. She further said that as the University approached 2022, the end of the current strategic plan, there is a need for the University to be forward-looking into the years ahead.

Director, LUCRID, Professor Babatunde Adebesin, in his introductory remarks, took the academic community down memory lane, revealing that it was the University’s Strategic Plan of 2017-2022 that recommended the establishment of the Centre for Research, Innovations and Discoveries and appreciated the management led by the Vice-Chancellor, Professor Olayanju for the implementation of the plan.

Also in attendance were members of the Landmark University Student Council led by their Chairman, King Eneyi Ed-Emmanuel Onyinua.