It was indeed an emblem of improved commitment of the current Management led by the indefatigable Vice-Chancellor, Professor Adeniyi Olayanju, as he has over the years chatted the right course towards ensuring the actualization of the University’s agrarian mandate. This was the core of the interaction that led to Landmark playing host to the Executive Director, National Cereal Research Institute (NCRI), Badeggi, Niger State, Dr. Aliyu Umar on 26th April, 2019.

He noted further that the Headquarters of the institute remained at moor plantation, Ibadan until December 1984 when it was moved to the Institute Rice Research Station, Badeggi which is now the Headquarters. The re-organization of the Nigeria Research Institute in 1987 further changed the mandate of the Institute as well as its areas of coverage consequently, NCRI was charged with national mandate for the genetic improvement of Rice, Sugarcane, Soybean, Acha, Beniseed, and Castor throughout the country as well as Farming Systems Research and Extension in all ramifications of Agriculture within the Central Zone consisting of Nassarawa, Niger, Kwara, Kogi, Plateau, Taraba, Benue States and Federal Capital Territory, Abuja. NCRI research activities are carried out both in the Headquarters and the ten (10) Outstations located in different parts of the country viz: Ibadan (Oyo State), Warri (Delta State), Amakama-Olokoro (Abia State), Uyo (Akwa-Ibom State), Bacita (Kwara State), Mokwa (Niger State), Birnin-Kebbi (kebbi State), Numan (Adamawa State), Yandev (Benue State) and Riyom (Plateau State) in close collaboration with both National and International Agricultural Research Institutes, Non-governmental Organization and Private Organizations, as Landmark will be one of the Universities the institute is collaborating with.

While welcoming the Executive Director and highlighting the contributions of the Institute to the development of Agriculture, the Vice-Chancellor, Professor Adeniyi Olayanju noted that the Institute and Landmark shares things in common, as the University has the quest to partner with relevant and reliable organization in driving its agricultural revolution mandate which underpinned the day’s meeting of both organizations. “It is our hope that good ideas will spring up from this platform that will further cement our relationship. Our representatives had earlier visited your community and your turn of visit to our amazing campus promises to bring on board what will add value to our University.”

In a related development the University Management also played host to the team from Tropical Agricultural Consultants, where the Vice-Chancellor stated that the Institution acknowledges the inspiring profile of the Lead Consultant, Engr. Tony Egba whose consultancy prowess in agricultural endeavours gains the attention of the Nigerian Government, hence he has served, among others, as Technical Adviser to Honourable Minister of Agriculture, Dr. Akinwumi Adesina (2011-2015), and consultant, Cassava Mechanization value chain to Federal Ministry of Agriculture and Rural Development here in Nigeria, a friend of Landmark University, having visited earlier and made kind remarks of our context. “Engr. Tony Egba is also a friend and professional colleague to the current Vice-Chancellor of the University. The hope is high that his distinguished presence and the wealth of experience of his team will add value to Landmark University, which is already noted for its unique values and rooted in agriculture.”

In is response, Dr. Tony Egba commended Landmark for undisputable hospitality permeating the whole environment and its agrarian revolution drive which he described as tenacious. He described the food crisis befalling Africa as an irony, as the continent’s food prices remains the highest all over the world. “We have the climate and it is only in Africa that you have farming season but in other places they farm all year round. But I believe our limitation as a continent is productivity and until we are able to embrace technology innovation, we will remain where we are.” He noted further that if appropriate technology is applied to farming, the nation’s farm land would yield more, as proper management of soil will go a long way to help resolve crisis surrounding farming. Dr. Egba also stated that he has observed that in Nigeria we have tractor drivers and not tractor operators, as getting high yield from farming requires proper training and precision agriculture. “You must know what your land needs per time and until we produce for productivity we are not going to make progress. I believe food will never go out of fashion but we need to embrace appropriate technology so that African race does not go out of fashion.”

The Lead Engineer, Engr. Sunday Ayinde also made a presentation on ‘Cassava Mechanization: Next Level in Cassava Production’, to intimate members of the University Management on the best method to get the best yield in cassava production. 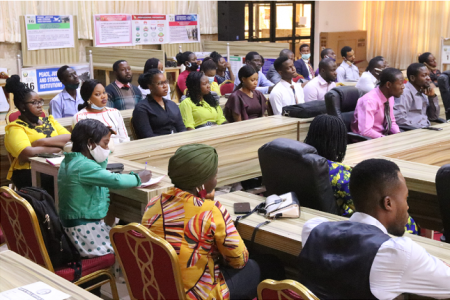 The School of Postgraduate Studies, Landmark University organized an orientation programme to welcome scores of freshmen to the various postgraduate programmes in the four colleges of the University for the 2020/2021 academic session on Wednesday, 24th February 2021. The Orientation Programme which was themed “Keeping Track with Best Practices in Postgraduate Studies”, was a veritable platform to introduce the students to the context and culture of Landmark University.

In fulfilment of the programme’s objectives, the Vice-Chancellor, Professor Adeniyi Olayanju relayed the University’s passionate drive of its research agenda in alignment with the United Nations’ Sustainable Development Goals (SDGs), noting that research stands as one of the core mandates of a university. During his presentation titled, “Building Your Research Career in Landmark University”, the Vice-Chancellor emphasized that their commitment to the research agenda would be their contributions as students towards the actualization of the overarching vision of the University.

Earlier, the Dean of the School, Professor Charity Aremu, had said that the orientation programme was designed to provide relevant information for the students to adjust well to the institution regardless of their previous backgrounds. The Dean presented the school’s studentship policies to the students and called for their commitment to upholding the terms throughout their studentship in Landmark University.