The one-day visit of the Director General, National Space Research Development Agency, Professor Seidu Mohammed to the Landmark University on Monday 26th February 2018 has further justified Henry Ford’s statement that “Coming together is a beginning, staying together is progress, and working together is success.”

The Director General’s visit created the platform to explore and expand the frontiers of the 16-month old Memorandum of Understanding between his Agency and Landmark University when he revealed the numerous opportunities available for the LMU in the Agency’s University Education Support Initiative which has been considered a responsibility towards nation building and developing along with the rest of the world.

While speaking within the framework of the Memorandum of Understanding, the Director General stated that his visit was apt because the collaboration would gain prominence at his meeting with other experts at the Japanese Space Centre in Tokyo later in the week where a tripartite agreement would be reach for the deployment of necessary support to develop a Nano Satellite. “It will also afford staff members of Landmark University the opportunity for M.Sc. and PhD degrees,” he continued.

He also disclosed that Landmark University would benefit from the second stream of candidates for training at the Space Institute about to kick off in April 2018. According to him, the institute is affiliated to the African University of Science and Technology, Abuja and would be accommodating the first set of 20 PhD and 40 M.Sc. candidates in the areas of satellite engineering, space application, and satellite building among other related fields.

In readiness for this feat, he said the Agency over the years has invested in the numbers of students who have gone to the US and the UK to study and now back home to transfer the knowledge acquired. “With over 130 PhDs on our platform, we are more than enough to start the programme. In the light of that, we will be willing to transfer some of the patented knowledge we have from our international collaborators. We believe this is the time for citizens to have access to this knowledge,” he explained. “There are other several research opportunities in the area of science, engineering and technology, and joint development of satellite technology and application as well as collaborative research in space science and technology,” he added.

Furthermore, the Director General assured that the agency would provide more opportunities for LMU students on Industrial attachments in the various space stations across the nation while also guaranteeing the Agency’s full support for the establishment of Aerospace Engineering in the University. “We believe it is our responsibility to catalyse this effort so that in the next few years, we will be proud of the number of aerospace engineers we produced,” he concluded.

Earlier on, while justifying the collaboration in relation to its relevance to humanity, Professor Mohammed said that space technology is strategic to development not only in design but also in the improvement of water resources, agriculture, standard of living, road construction and other forms of infrastructures. He said that the Agency has been at the vanguard of knowledge transfer in this regard while expressing happiness over the effort of Landmark University towards providing the platform for engagement under the framework of the Memorandum of Understanding.

Having arrived the University campus a day before the meeting, the Director General and his team were led by the Vice-Chancellor, Prof Adeniyi Olayanju on Facility Tour of LMU Farms. This afforded him to see the rich endowments committed to the overarching vision of the University. 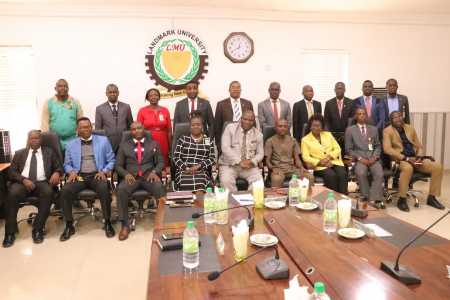 The Management of Landmark University ably led by the Vice-Chancellor, Professor Adeniyi Olayanju on Tuesday, 18th February, 2020 received Mr. Chyke Samuel, the Operation Manager, BPZ-BP LTD on an agrobusiness visit to the institution.

Receiving Mr. Chyke, Professor Olayanju revealed that although agricultural practice in Nigeria has over the years improved, there are still other areas lagging and not yet meeting the world-class standard, hence the audience granted BPZ-BP LTD. Professor Olayanju further emphasized that relevant innovations should be encouraged to remedy the gaps begging for attention. “We cannot shy away from this reality of food insecurity and poverty ravaging our continent. It is high time we doubled our effort in the application of science and technology in agriculture,” he added.

While anticipating that the presentation by BPZ-BP LTD would explore more initiative techniques and strategies for boosting agriculture towards addressing the exponential population growth in Africa and its economic implications, the Vice-Chancellor recognized precision farming and sustainable agriculture as one of the panaceas to the challenges facing the black race.

The Operative Manager, BPZ-BP LTD Mr. Chyke Samuel in his presentation on Arisetech Microbial Inoculant said the innovation’s usefulness cuts across virtually all agricultural sectors from livestock to plants, poultry, aquaculture, waste management, water conditioning and many other. Mr. Samuel noted that Arisetech when applied appropriately, has diverse benefits which include increase bountiful harvest, decrease dependence on chemical additives such as fertilizers, acts as growth stimulants for faster growth and improve livestock health and quality among others. Mr. Samuel added that the company had chosen the university as its pioneer partner in the north-central region of the country due to its pedigree and commitment to the agrarian vision and is ready to experiment with the product on her farm.