The Vice-Chancellor, Landmark University, Omu-Aran, Kwara State; Professor Adeniyi Olayanju, has expressed the intention of the University to partner FUNAAB, towards actualising the objectives of both Universities.

Professor Olayanju, who was until his appointment, the Dean, Student Affairs of Federal University of Agriculture, Abeokuta (FUNAAB), noted that he holds FUNAAB in high esteem, most especially, in the areas of sustainable agriculture, product development and raising graduate-farmers. Addressing the Acting Vice-Chancellor, Professor Ololade Enikuomehin; Professor Olayanju stated that, “it is in recognition of FUNAAB’s capacity and Landmark University’s passion for continuous improvement in agricultural practice, as a panacea for hunger, poverty and economic downturn that we have made this visit, to initiate partnership processes towards actualising the objectives of both universities, for the ultimate gain of the society.”

He further asserted that, "It is not by happenstance that my first outing in an official capacity, as the third substantive Vice-Chancellor of the Landmark University, Omu-Aran is to the leadership of the University that gave me ample platform for academic and professional experiences that earned me this Vice-Chancellor's appointment in a foremost private and agriculture-based University in Nigeria. We are happy to be here and open to progressive ideas that will transform the agricultural and educational landscape of Africa." He added that the collaborative effort ‎between both universities would engender practical delivery of life-transforming products.

Professor Enikuomehin, however, assured Landmark University that FUNAAB would be available to give what is required to make the partnership successful. He added that he was pleased to welcome Professor Olayanju back to FUNAAB, saying "it is our pleasure to play host to one of our own. We find it difficult to veer-away from acknowledging that Professor Olayanju is our own. It is really a pride for us that he was found worthy to be appointed as the Vice-Chancellor of Landmark University. I want to say clearly that we will be available to give all that is necessary, to make you succeed, as the Vice-Chancellor of Landmark University, knowing fully well that the partnership would also benefit us."

While presenting courtesy gift items to the visiting Vice-Chancellor, the Deputy Vice-Chancellor (Academic) of FUNAAB, Professor Oluyemisi Eromosele, said she was glad to read of Landmark University’s drive to‎ lead agricultural revolution in Africa, as she charged Professor Olayanju to walk-the-talk. Present at the occasion were the Chairperson, Committee of Deans and Directors/Dean, College of Agricultural Management and Rural Development (COLAMRUD), Professor Bolanle Akeredolu-Ale and the Deputy Director II, Vice-Chancellor Office, Mrs Toyin Dawodu, among others. 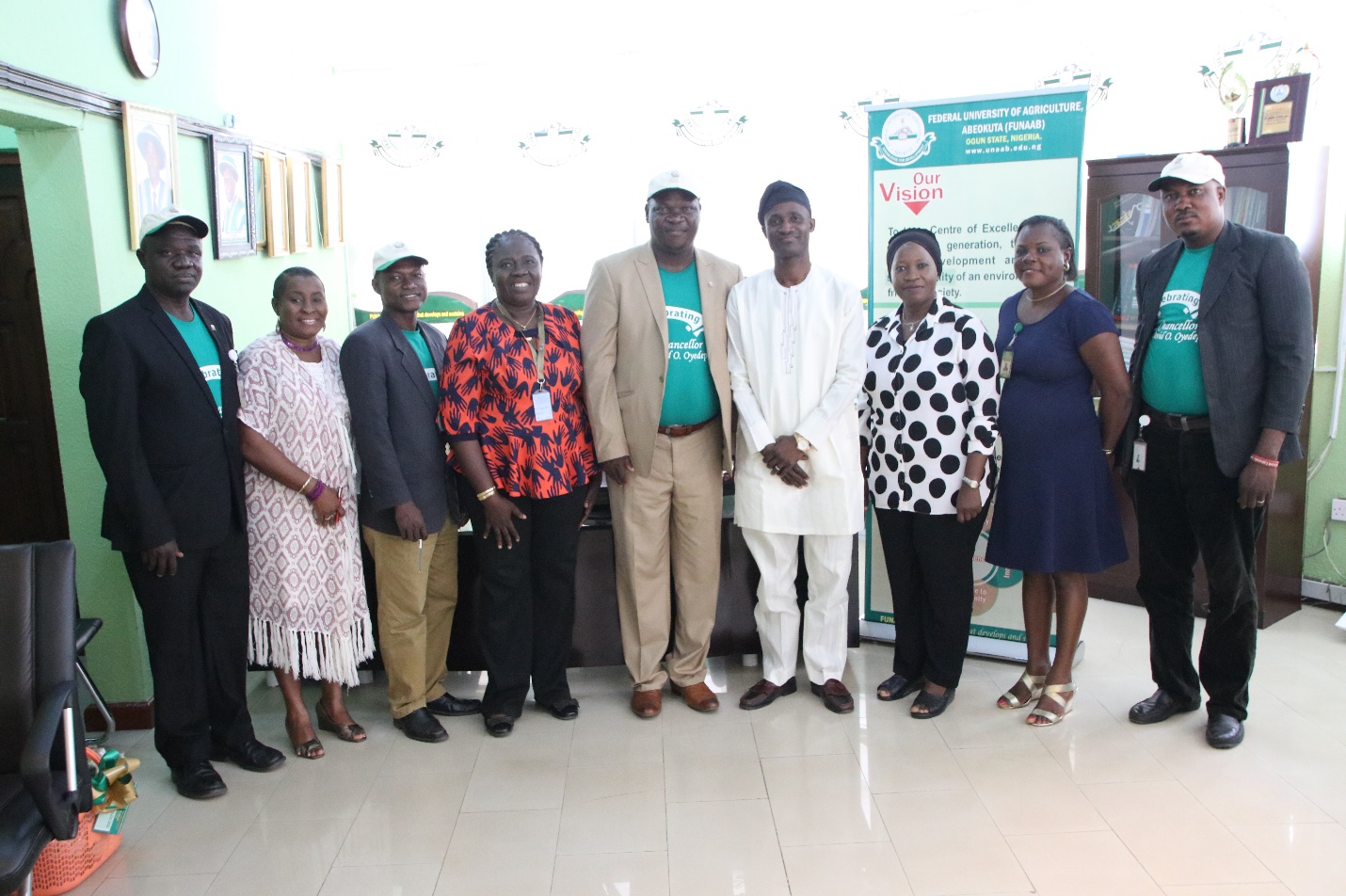 A group photograph of both Landmark University and FUNAAB teams. 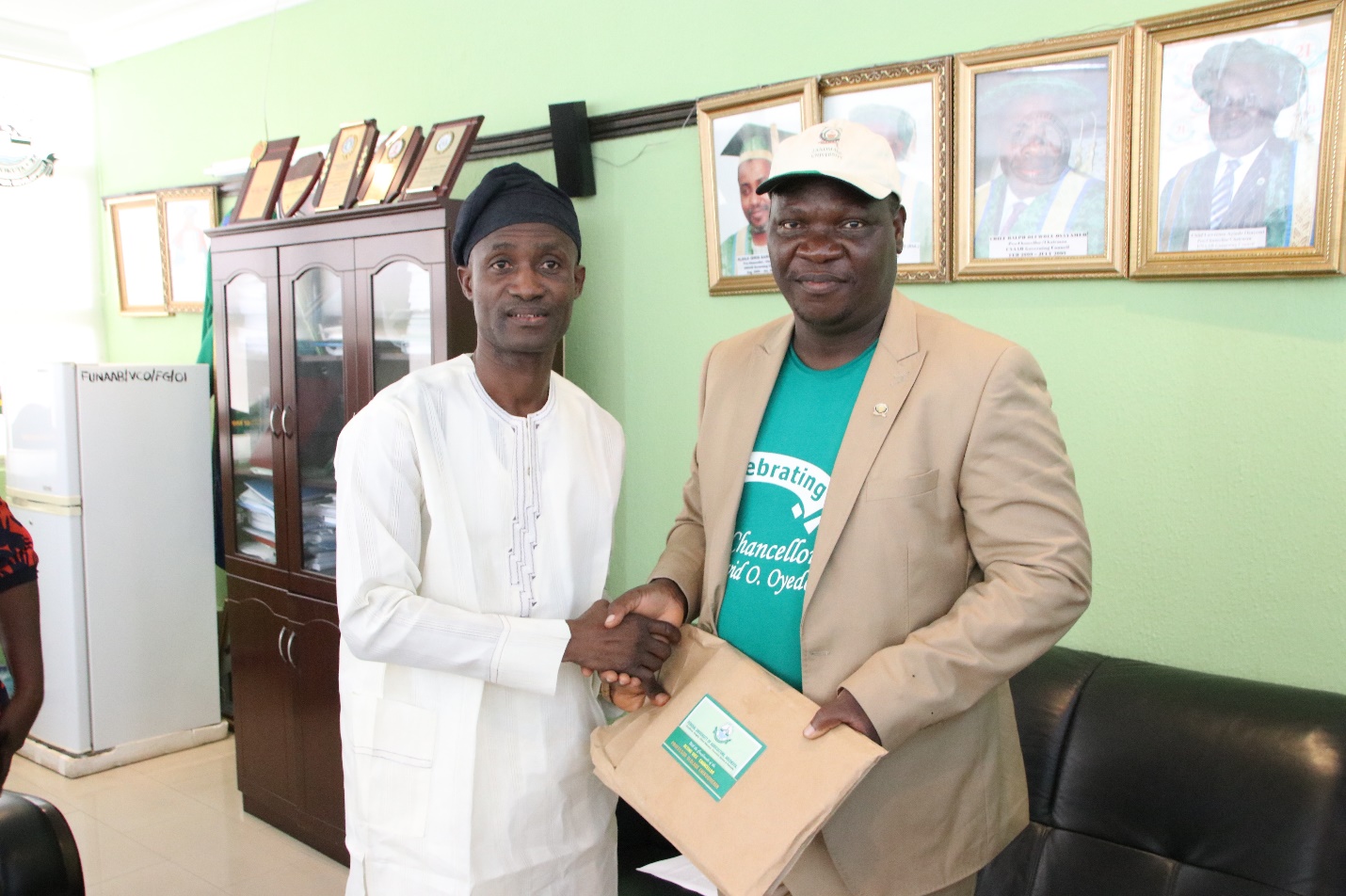