The Chancellor, Dr. David Oyedepo in his address captioned “Marketing Agriculture to Secure the Destiny of a Nation” as delivered by the Vice-Chancellor, Covenant University, Professor Charles Kayode Ayo noted that, Landmark University is indeed a revolutionary platform in Education with a mandate of ensuring food security in Africa. “Our quest is to raise an army of agricultural entrepreneurs, and ensure sustainable commitment to agricultural endeavors by our graduates who will actualize the University’s motto of ‘Breaking New Grounds’ as is driven on the wheels of our visionary thrust”.

Stressing further the mandate of the University, the Chancellor said, “The visionary emphasis of Landmark University is exemplified in her strong emphasis and commitment to promoting the Man-child model of education, which is poised to unlock the doorways into an agricultural revolution for the 21st century.”

He expressed worry at the spate of food insecurity in the nation when he noted that, “Food insecurity is a major global concern as over one billion people are suffering from starvation, under- and malnutrition. According to the United Nations Food and Agriculture Organization, almost all the hungry people, 780million live in developing countries representing 12.9 percent, or one in eight of the population of developing countries and regrettably, Nigeria has transitioned from being a self-sufficient country in food to being a worrisome net importer of agricultural produce.” Despite this huge gap, the Chancellor enjoined all to embrace Agriculture as a key sector that can improve food security in Nigeria. He restated the University’s commitment towards restoring the dignity of the Black Race by spearheading an agrarian revolution for the continent of Africa via the exploration of hidden treasure in the Mother-earth. While congratulating the Parents, Guardians, well-wishers and matriculating students, he assured them of boundless opportunities available at the University and encouraged them to be committed to the ideals that Landmark University stands for in their generation and time.

The Vice-Chancellor, Professor Aize Obayan in her address also reechoed the University’s commitment to contribute to the process of providing solutions through curriculum development strategies that emphasize cutting edge approach to issues and the University’s drive for entrepreneurial development scheme that bridges the gap between theory and practice, and a practical commitment to investment in agri-business and agri-preneurship.

Reeling out defining events and major accomplishments of the University, she noted that Landmark University currently runs three established farms as a training ground for raising the army of agricultural entrepreneurs, who are set to break new grounds upon graduation by bringing into reality, food security for our nation and continent. “At the Teaching and Research Farm, we have Maize, Soybean, Groundnut, Cassava, Vegetables, Cattle, Piggery, Sheep, Goat, Rabbitery, Poultry and Green House. We run a Commercial Farm, where there are Broiler Birds, Laying Birds, Fish Ponds, Crop and Feed Productions. The Eleyin Farm Plantation situated in Eleyin village is devoted for Jatropha plantation, a biofuel plant of great economic importance, and cassava plantation. Our agricultural products such as frozen chicken, smoked fish, eggs, vegetable, fish bite, sweetened chips, milky biscuit, bread, palm-oil, garri and others are being exhibited at their various stands outside this hall and are also in the various markets in Nigeria. The most recent breakthrough on our Teaching and Research Farm is the on-going harvest and launch of Landmark University brown rice from our Fadama rice plantation.” She also highlighted the efforts of the University to remain a cynosure in the prestigious category of the best Private University in Nigeria, which was exemplified in the July 2015 edition of the Webometrics Ranking of Universities, where Landmark University emerged the best Private University and 15th overall among all Universities in Nigeria. She mentioned too that six of the University’s Faculty are on the Google scholar listing among the 800 researchers in the Nigerian Universities.

Other highlights of the event included presentation by the 100 level Word Casters Group, Taking of Matriculation Covenant, Ceremonial Signing of Matriculation Register, Goodwill Messages from Parents and the representatives of the Olomu of Omu-Aran, Oba Charles Ibitoye, led by the Oniwo of Iwo, His Royal Highness (Arc) Olutade Joshua. 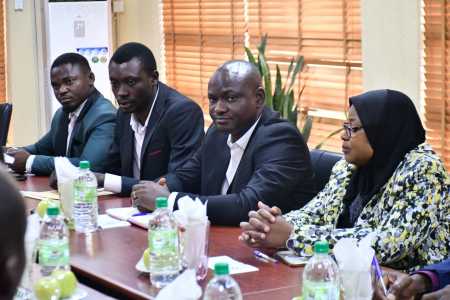 On Tuesday, 30th August 2022, the Landmark University Management ably led by the Vice-Chancellor, Professor Charity Aremu received the Kwara State’s Coordinator of the Standards Organization of Nigeria (SON), Mr Feyisayo Ayeni, who was in the company of his heads of units, on a courtesy and partnership visit to the University.

Speaking on their visit, the State Coordinator, who upon his assumption of office was determined to position Kwara State’s economy for global competitiveness by ensuring a better standard, quality products, and strong analysis of research for industrial growth in the state, has been seeking the collaboration of higher institutions of learning within the state to draw technical expertise to the SON’s processes and procedures. The drive, according to him, was intentionally targeted at bridging the gap between the knowledge base of universities and the producing industries for all-round growth in the state. He emphasized the significance of the strategic collaboration which he said will enhance their organizational capacity towards realizing their vision of improving life through standardization and quality assurance.

In her response, the Vice-Chancellor noted the aptness of the strategic collaboration visit which she said signposted an alignment with the University’s drive to fulfilling its community impact mandate. She said the move of SON to identify more effective collaboration and synergy for result-oriented and seamless operations was a reawakening of the consciousness of the significant role of Universities which has become crucial for the overall good of the nation’s economy and the safety of its people. She expressed the readiness of the University for the collaboration in view of its deliverables to nation-building.

The meeting rounded off with an interactive session between the two teams that opened up grey areas that would be considered for improvement as both teams looked at a progressive collaboration to promote standardized products.