The Management of Landmark University led by Professor Aize Obayan launched a campaign tagged “Zero Tolerance for Unethical Practices in Examinations” as part of her frantic efforts towards maintaining excellence, integrity and spirituality that define the uniqueness of Landmark University.

The event, which took place during the Tuesday and Thursday Chapel Services on 12th and 14th January respectively, witnessed a major presentation by the Chair, Examination Committee, Dr. M.O. Bamiro, who articulated the present and future implications of unethical practices in examinations on the University system, the nation and the world at large. He asserted that Landmark University is a God owned institution with a compelling mandate of doing only what will delight God, hence the adherence to departure philosophy of the University, and insistence on a Zero Tolerance for Unethical Practices in Examinations. He added that Landmark University, an institution avowed to raise a new generation of leaders cannot afford to raise leaders that lack integrity. He concluded by citing from I Peter 2:9, “It is an abomination for a king to commit wickedness”. Therefore, Landmark University students, “Kings and Queens” as they are fondly called, were charged to see examination malpractice as an abomination before God which should be clearly avoided.

The Chair, Student Council Representative, Mr. Olaniyi Ademuyiwa described Landmark University as an institution founded on covenant principles which cannot afford to be associated with any form of examination malpractices. He therefore urged the student body to embrace the change, a new culture of alignment with ethical practices in examinations.

In simplicity, the Registrar, Dr. Daniel Rotimi remarked that zero tolerance implies no tolerance at all and as a result, all students, faculty and staff are entering into a covenant to forestall unethical practices in examinations.

In her remarks, the Vice Chancellor, Professor Aize Obayan, said that the University is embarking on a fundamental project which is in alignment with the Institution’s Core Values. While thanking God for the success recorded in the previous examinations, she emphasized that “as a community, we are ready to drive zero tolerance for unethical practices in examinations”. She also added that the launch of the project was a great way to approach the examination season, “knowing that we avoid anything that will compromise our future and the entire University”. She appreciated the Chair, Examination Committee, Dr. M.O. Bamiro, for his diligence in driving quality conduct of examinations in the University over the years. She concluded by quoting the immediate past President of South Africa, Thabo Mbeki, “Africans will continue to be the subject of ignominy and contempt until such a time when they become demonstrable masters of their own destiny”

The project of a clean white bill board, with the inscription of Zero Tolerance for Unethical Practices in Examinations, was unveiled by the University Management, led by the Vice Chancellor, Professor Aize Obayan. The Vice-Chancellor took the lead in appending her signature on the board signifying a formal and spiritual covenant to abide by the University’s policy on Zero Tolerance for Unethical Practices in Examinations.

The event was crowned with the ministration by the Chaplain, Pastor Adekoya Ayotunde, on the subject, “unveiling the wonders of Fasting and Prayer”. He stated that understanding is a gateway to a true-living in the kingdom (Ps. 119:144). “It is therefore expedient to understand the wonders that lie in fasting and prayer as we journey on this 21-days waiting on the Lord”, he inspired the congregation. He highlighted the wonders in fasting and prayers: relevant forces (power) are required to make a meaningful change in life – Mat. 17:21, spiritual barriers are rolled away, evil occurrences are averted – Acts 23:12-14. He also put what could make prayer and fasting work as fervency in request for miracle desired (James 5:16) and living a life devoid of offences (Ps. 66:18). The Chaplain concluded his ministration with this counsel and declaration of blessings on the University community. 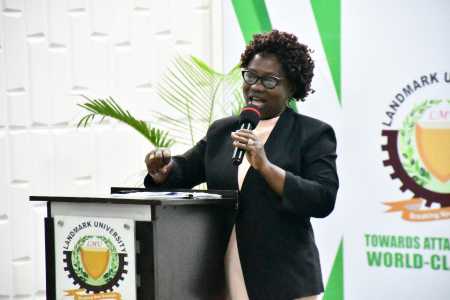 The Acting Vice-Chancellor, Landmark University, Professor Charity Aremu, has mentioned strategic influence, networking, production for impact and moving research from shelf to product as some of the action plans billed for passionate pursuit starting from the 2021/2022 academic session. She unveiled these action plans at the 2021/2022 Academic Session Opening Assembly for Faculty and Staff of the University on Friday, 16th October 2021 at the International Conference Centre. Professor Aremu noted that the action plans are to leverage the provisions of the University’s vision, core values, licence and brief, policies, strategic plans and the United Nations’ Sustainable Development Goals (SDGs) in their focus. She, therefore, called on the academic community for unflinching support towards consolidating the works of her predecessors thereby adding value to the vision of the University. As her maiden appearance at the University gathering since her assumption of office as the Acting Vice-Chancellor, Professor Aremu appreciated God for the privilege of qualification, and blessedness of service. She expressed appreciation to the Chancellor, Dr David Oyedepo for yielding the call which birthed the platform for her service. Professor Aremu also thanked the Pro-Chancellor, Pastor Mrs Faith Oyedepo who has demonstrated her support for the advancement of the University in all ways.

The Registrar, Miss Fola Oyinloye had earlier announced that returning students would be resuming the campus starting from Saturday 16th October 2021. She revealed that delegated staff of the University would be at the gate to receive them. While reiterating the University’s strict compliance and enforcement of the NUC rule of 75% student class attendance before he or she can be qualified to sit for examination, the Registrar announced that lectures for the 2021/2022 Academic session would commence on Monday, October 18, 2021, with class attendance capturing. She implored concerned faculty and staff to drive the policy faithfully.

Charging faculty and staff on the consciousness and maximizing the presence of God for all-round success both as individuals and as an academic community, the Chaplain, Pastor Oluwatimilehin Omotunbi, admonished faculty and staff to always see God’s presence. Sermonizing from Psalms 114, he established the benefits of God’s presence and gave the requirements to retain His presence which are spirituality, thanksgiving, joyfulness of heart and rejoicing always.

The University Secretary, Pastor Frederick Aghahuwa who graced the event closed the session with showers of blessing on the faculty, staff, students and the university at large for unprecedented landmark accomplishments and a successful academic session.