It was an elating sight to behold on 7th January 2019, as Faculty and staff of the University gathered at the Multipurpose Hall to hold the Opening Assembly after the yuletide. The meeting held in an atmosphere of jubilations and thanks to God for bringing all back from journies made during the break.

After a brief announcement by the Registrar, Dr. James Ndako, the Vice-Chancellor, Professor Adeniyi Olayanju said that he was glad to welcome all Faculty and Staff to the campus following the short Christmas and Alpha Semester Break in 2018/2019 academic session. “We appreciate God for His love, faithfulness and protection over our lives all through the Break, noting His mercies that saw us through our journeys back to our amazing campus. I am confident that you are truly refreshed for fresh vision-driven actions in the New Year. I trust God for the release of the spirit of faith on LMU community in bringing to reality a fulfillment of Dominion Prophecy with respect to Agrarian Revolution mandate of the University.”

Citing the book of Ecclesiastes, “there is a season, and a time to every purpose under the heaven” (Ecclesiastes 3:1), he noted that this is the time for the consolidation on the exciting leaps the University graciously took last semester, hoping the grace of the Yuletide break and Dominion Prophecy were ample enough for all to deploy greater efforts in Omega Semester for a surpassing result.

The Vice-Chancellor stressed that the University would not compromise her continuous improvement stance in all facets of her operations, as it is expedient that all put preference on cooperation above competition, and corporate goals above personal interest for speedy actualization of the University’s goal.

“In unity we stand should continuously be our watchword as exemplified last semester in our publication drive, so that our efforts be doubled to yield multiple fold results, which is attainable in our context, where we receive as much as we can see and hold in hand as much as what our heart can conceive. In the strength of togetherness we recorded Over 200 Scopus indexed publications last year at the time of closing assembly. I am confident that we are more than able also in harmony, diligence and faith to double this feat in the year of our Dominion 2019.”

He, therefore welcomed all afresh into the New Year filled with awesome opportunities for demonstration of the divine and declared Dominion as well as limitless breakthroughs, which he emphasized, shall all be maximized by the grace of God. 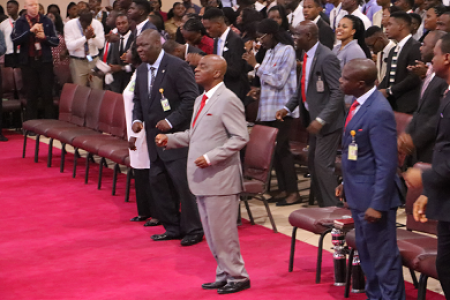 The Chancellor, Landmark University, Dr. David Oyedepo on Saturday 17th October 2020, charged the students on the values and virtues of spirituality as he welcomed Kings and Queens back to campus from the Covid-19 lockdown break. The Chancellor, who expressed delight to see the students back to campus safe and sound, unfolded the benefits of a determined walk with God, noting that man in his original estate was a product of the spirit world going by the creation of the first man and woman in the Bible. He said, “There was no biological process responsible for a first man or first woman. They were creation of God and God is a spirit. So, they were born of the spirit, they were spiritual product.”

He explained further that, “Among other things, we saw how intelligent Adam was. After God created all the animals, he brought them to Adam to find what he will name them. And whatever name Adam gave to those animals that was the name which they were called. Man was operating at God’s own intelligence frequency”.

Dr. Oyedepo, thereafter, noted that among the benefits of spirituality is high intelligent quotient. Buttressing his point, he cited the exploits of the four Hebrew – Daniel, Shadrach, Meshach and Abednego in the scripture. “God gave these four wisdom and understanding in all skills so when they were tested, they were ten times better than their colleagues. Their deep root in spirituality impacted massively on their intellect. We have this further proven when they were challenged, they were people sold out to quality walk with God,” the Chancellor expatiated.

Further, the Chancellor reiterated that spirituality does not make dummies; it, as a matter of fact, empowers believers to dominate their environment, endeavors and circumstances. He added that, “It’s a major plus for God giving you an opportunity to be at Landmark University where spirituality is our number one core value to bring bearing to your life, to give meaning to your life, to give you a place in space.” While admonishing the students that his early encounter with Christ as a teenager is worthy of emulation, the Chancellor noted that, “The cheapest way forward in life is to identify with those who have been there and if you are interested, you take steps after them.” He urged them to walk away from anyone who might negatively influence them against the will of God, as he encouraged them to live righteously for their glorious destinies to open up.

Addressing the graduating students, Dr. Oyedepo shared with them that the only secret to having a fulfilled and successful future is walking with God and maintaining the spiritual journey starting from now. He said further that people are so apprehensive, life is so uncertain to them, but the closer they are to God, the more real the future becomes.

Concluding his admonition, the Chancellor advised them to shun examination malpractices and any other vices that can jeopardize their glorious future. He added that there is no human effort or skill that compares to the values and virtues of spirituality, emphasizing that Godliness is profitable unto all things.

Earlier, the Vice-Chancellor, Professor Adeniyi Olayanju had described the meeting as an impartation service for the students, noting that in spite of the Chancellor’s busy schedule, he had created the time to come and pronounce blessings on the students. He, therefore, urged them to maximize every moment of the impartation session.